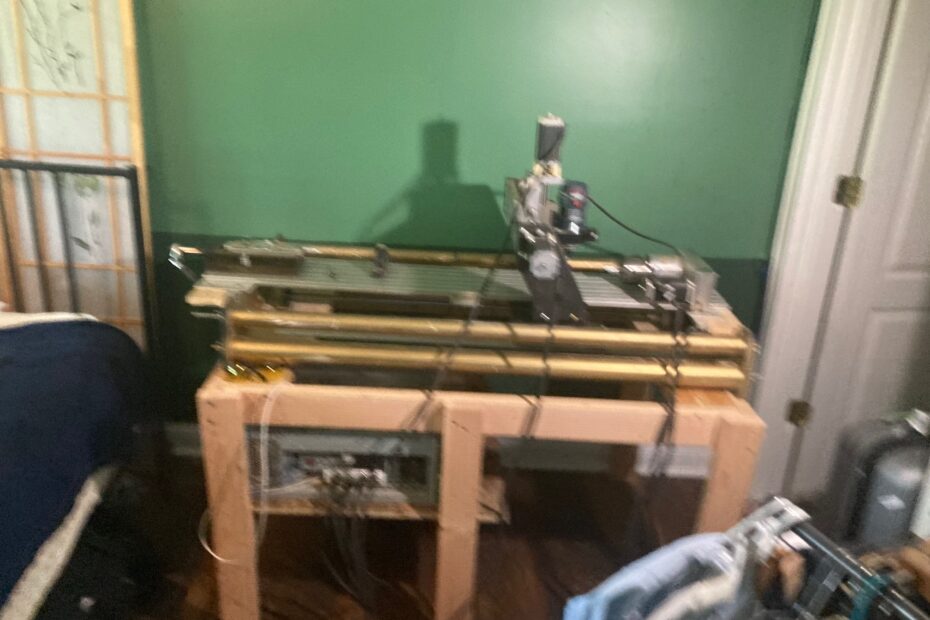 So Sam hasn’t posted for a while. Well its cause He got a job! his health has improved and he is back to doing what he does best! running production lines for a big company like a cog in a wheel. Now Miller Sam has Health insurance and has paid off most his credit card….for now.

In order to continue his projects it has become very clear that a gantry mill will be essential to the fine detail work necessary for miller Sam’s project ideas. The Sherline has its uses but not one machine can efficiently do it all. What about router engraving or laser engraving? Also, for productivity, the 8 by 7 inch work space on the Sherline is not not Ideal. Hence the reason miller Sam is putting so much effort into resurrecting the dinosaur.

So this was lying in a basement unused but everything was intact. The lead screws look to be ball bearing threads which means someone paid a lot of money to have a machine with reduced backlash. The big driver box was assembled by someone who ordered the parts from Planet CNC. Upon further investigation it became clear that the Arduino controller had not been sold by Planet CNC for quite a few years. Miller Sam Found that the Controller was outfitted to work with the Mk I interface. Very old. But interesting enough Miller Sam did not fine any limit switches attached to the CNC controller.

limit switches add a lot of usefulness to a machine. Keep the explanation short, it makes placing a consistent Machine zero a lot easier. In order for the Parts to be cut actually machine needs two coordinate sets basically. Machine zero, and work/model piece (G54) zero. There are tool length compensation values and wear/radius values included in the program. But really its only two coordinates you need to start cutting. Also it can be confusing when someone looks at a Fanuc interface or even Mk3/4 and they see a relative, absolute, and machine coordinates values. Miller Sam recommends Mike Lynches book series on Fanuc Programing. He’s read most of Lynches work and it really clears the air of some of the mysteries of part set up, though be warned, with out in shop experience you may not understand the value.

Clearly the person who owned this machine did not understand the need for limit switches which could have made this machine a bit easier to use. They even fitted it with a Fourth rotary A axis. A axis rotates around the X axis, B around Y, and C around Z.

Once Mk I was uploaded onto Sam’s computer it was easy enough to gain control of all fours axis, though not cutting since the new limit switches are on the way.

After finding some deck screws and purchasing lumber from the Home Depot The Gantry Mill now has a Permanent level home.